The Physics of the Electric Guitar Video!

The video you've been waiting for is here!

If you have ever wanted to know what a wammy bar is for, why pickups are magnetic or why an electric guitar is so different from an acoustic guitar, then today is your lucky day!

The Physics of the Electric Guitar video for AAPT Films delves into the physics of sound and how the construction of the electric guitar uses physics to create all the songs we love so much. This video has demos, excellent visuals, and physics equations too.

After watching the video, you may want to focus on certain details and read in the textual form, so check out my blog entry on this topic: Rock Out to Electric Guitar Physics. Or just go watch the video again!
Posted by James Lincoln at 10:18 AM 1 comment: 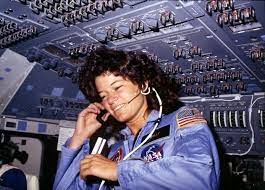 What if one day you were on your college campus and noticed an intriguing ad in the college newspaper? This may be a rather common experience, but for Sally Ride, this common experience became an uncommonly important moment in her life.

While studying at Stanford University, Sally Ride noticed an ad placed by NASA recruiting astronauts, which piqued her interest. As an undergraduate, Ride double-majored in physics and English literature and then continued her studies at Stanford University to earn a Ph.D. For her dissertation research, Ride studied the theoretical behavior of free electrons in a magnetic field.

Sally Ride was chosen for our list of eminent and influential women physicists for several reasons:

2) a role model for women and all scientists

In 1978, Ride was chosen by NASA as an astronaut candidate; she was only one of six women among 35 trainees who were selected. That same year, she earned her Ph.D. in physics from Stanford University.Later she went on to engage in rigorous astronaut training, from flying jets to parachute jumping to working on the shuttle’s robotic arm.

Her role as an astronaut also marked a shift in the American space program. Sally Ride was the first American woman in space and went on to become a role model for aspiring astronauts and young women interested in studying physics and astrophysics. On another level, Ride’s involvement in the space shuttle program was a step toward demilitarizing NASA. Prior to Ride’s time at NASA, most astronauts had served as fighter pilots. Ride’s contributions to the space program signified a growth period for NASA, where scientists, not just pilots, would board American spaceships.

Learning about Sally Ride’s full life can inspire many students, young women in particular, to pursue physics as a career. As a child, Sally Ride loved to play tennis and pursued a professional career in tennis for a time. She attended an all-girls high school in Los Angeles, and studied both literature and physics as an undergrad. She conducted challenging physics research, taught as a physics professor at UC San Diego, and served important roles at NASA, both through being an astronaut and other work there. Later, she took part in the Challenger investigation before retiring from NASA. She never fully retired from her mission as a leader in the sciences—months before her death (of pancreatic cancer in 2012), Sally Ride still played a leadership role at Sally Ride Science, as President and CEO.

“I would like to be remembered as someone who was not afraid to do what she wanted to do, and as someone who took risks along the way in order to achieve her goals.” ~quoted from an interview at Achievement.org

Check out a photo gallery of her life here. 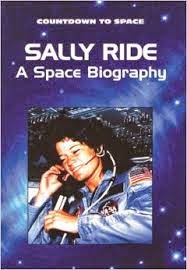 Posted by James Lincoln at 6:57 PM No comments: