Measuring Radiation on the California Coast

There had been a recent video online suggesting dangerous levels of radiation on the California Coast. I decided to find out for myself. I was honestly expecting the results to come back positive, indicating radiation, but they did not.

I checked and re-checked and there was no measurable radiation above the background, which is normal.

I used a handheld Geiger counter and visited Crystal Cove State Park to conduct my experiment.  You can watch the video here.

Posted by James Lincoln at 7:46 PM No comments:

Right now I am at the American Association of Physics Teachers (AAPT) National Meeting in Orlando, Florida.

I am presenting in a few minutes at 8 pm East Coast Time. My topic: the Magic of Diamagnetism.

The theme of the conference is "the Magic of Physics."

I have also discussed diamagnetism and other types of magnetism in a recent blog post and in a video for UCLA.

When I return home, I will share more thoughts on my experience at the conference as well as my trip to the Kennedy Space Center!
Posted by James Lincoln at 4:28 PM No comments:

I have posted a collection of Julius Sumner Miller Videos as part of the Video Series Collection at PhysicsVideos.net. As you know, I use this website to curate a collection of classic physics videos and other videos that I think are worth watching for the audience of physics teachers.

I know you will find these videos both entertaining and informative.

He graduated with a Master’s degree in Physics from Boston University in the 1930s, and later went on to become a lively, memorable television personality for children’s science programs. He worked on "Great Moments in Science" and “Great Men of Science” for Walt Disney, for example, and starred as "Professor Wonderful" on the Mickey Mouse Club TV program.

You can see his photos on this vinyl record covers below:

In 1950, he enrolled at Princeton at the Institute for Advanced Studies, where he was a student and later lifelong friend of Albert Einstein.

During his life, Miller was a well-known Physics demonstrator from El Camino College in Southern California and elsewhere. He worked at El Camino College for over 20 years, from 1952 until his retirement in 1974. Check out the website for the Julius Sumner Miller Foundation, which offers grants.

This first video, called "The Idea of the Center of Gravity" is less than 15 minutes long and you will learn a lot.


A new teacher would do well to watch his lectures which are full of ideas and philosophy for physics teaching. He also published numerous books, including texts about physics demos.

Go to this link to watch the videos:
www.physicsvideos.net/miller.html

www.juliussumnermiller.org
http://en.wikipedia.org/wiki/Julius_Sumner_Miller
Posted by James Lincoln at 5:00 PM No comments:

Rock Out to Electric Guitar Physics!

In my younger days, while a student at UCLA, I was in a rock band, and yes, I played the electric guitar. See the photo below? 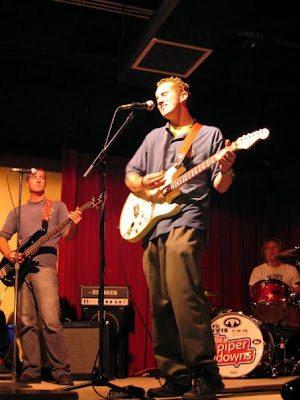 That’s me, with my brother John on bass and friend Matt on drums. We played shows in Los Angeles and Orange County, and we had a great time. While I still play acoustic and electric guitar for fun (and the odd school talent show), my enduring interest in the guitar is actually physics-related.  Being both a musician and a physicist, I like to think I have some unique insights into the physics of sound and music.

In addition to the guitar, I also play the piano and the harmonica. Over the years, I have examined the physics behind sound and sound waves, and worked hard to figure out exactly how the electric guitar works. Next time you carry an amp for your friend after a rock show, you might think about “what does amp mean?” When you hear a rock star mention distortion or when you hear distortion at a concert, you might wonder about the cause.

You can learn more about the history and progression of the Electric Guitar at this Smithsonian website, part of the Lemelson Center for the Study of Invention and Innovation.


The electric guitar, like any guitar, consists of strings that are stretched tight across its neck. When these strings are plucked, they vibrate at various frequencies that are supposed to sound like music. The strings on the electric guitar have different densities and different tensions; for this reason, they vibrate at the frequencies intended by the musician. Tightening the string does not change the length of the string very much, but it will increase the wave speed as the standing wave vibrates up and down across the string.

In my video, of course, I will be writing equations on the board and explaining them (in addition to demonstrating with an actual electric guitar and showing you demos to use with students), which will give you more information about mass, wavelength, amplitude, and tension and how they relate to the electric guitar.

How is an electric guitar different from an acoustic guitar? 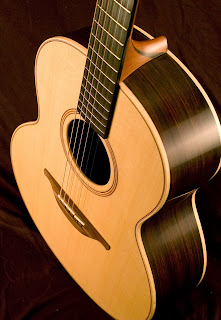 Acoustic Guitar(above):
notice the larger body with space for sound to vibrate inside

Electric Guitar(below):
these can be flatter than acoustic guitars 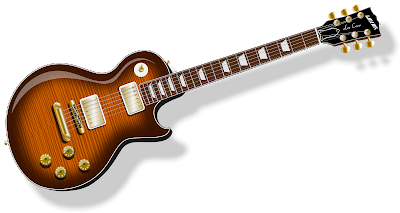 The electric guitar, rather than vibrating its body with the pluck of a string, has its signal picked up by the pickups on the bottom. You can actually choose which pickups to use by flipping a switch. 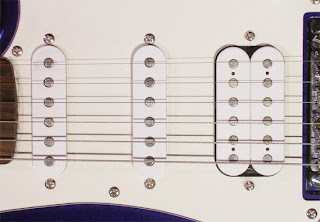 Can you see the little silver pickup magnets?

A pickup is, in a way, electromagnetic, but in this case, to be precise, we should call it a generator. So, how does a pickup work in the sequence of electric guitar music-making events?

An electric current runs through the coil in the pickup, which magnetizes the string and turns it into a magnet. Then, when a magnet is moved over a coil of copper, it generates electric current which can be amplified and then converted into sound by means of a speaker, sometimes called a transducer.

So far, we have discussed strings that vibrate, generating current which can be amplified and sent through a speaker. However, there is one more thing the electric guitar does that the regular guitar does not--distortion.

How is distortion achieved?

When you amplify the signal beyond what the circuit is capable of handling, you get clipping. This happens with a kazoo. When you talk through a kazoo, it will distort your voice, because its vibrating membrane cannot vibrate with enough amplitude. If you have a kazoo lying around, try this! 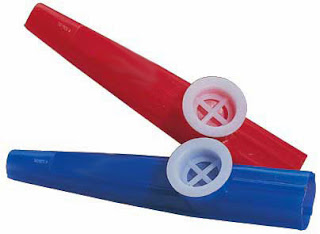 The same thing happens when you overcrank the signal going into the circuit that amplifies the electric guitar’s sound. A signal that is too large gets clipped and that distortion = the wonderful sounds of rock music. 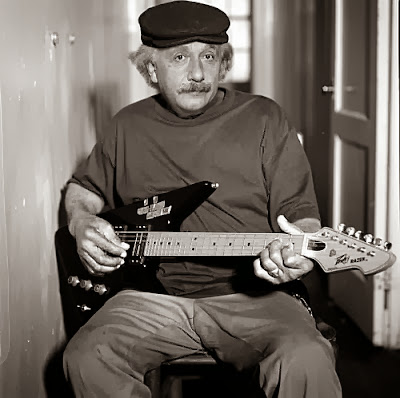 If you know the original source of this image, please email me!
Posted by James Lincoln at 10:59 PM 2 comments: