Behind the Scenes Interview with Anna Spitz

Go behind the scenes with our host Anna Spitz and learn what it was like to film the series "Try This Experiment Right Now!" 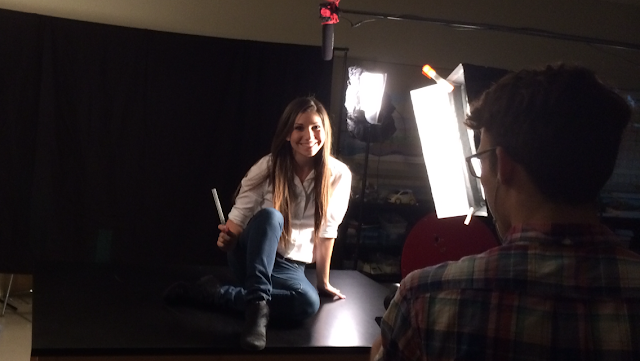 LincolnPhysics: Which video was your favorite and why?

Anna Spitz: “Sing Happy Birthday” would have to be my favorite. First off, it was extremely fun to film.

Anna Spitz: I remember taking a lot of time convincing certain members of the crew to take part in it, and even trying to get myself to sing publicly was a necessary and fun challenge. Once we all got into it, it started to come together. We ended up doing a lot of laughing in between takes, which makes it the most memorable to me.

LincolnPhysics: Which video helped you learn something new about science that you did not know/found the most interesting?

Anna Spitz: “Audio Triangulation” was the most interesting to me, because it seems so simple, yet it is such uncommon knowledge.


Anna Spitz: Of course it takes more time for sound to travel to the further ear, but only a physicist would actually think of that. I think this video helped me in particular to start thinking like a physicist and looking for answers to questions without obvious answers in everything around me.


LincolnPhysics: Which video was the most challenging to act in and film?

Anna Spitz: This is a question that I don't need to think for even a full second about. “Up Down Dizzy” was hands down the most challenging thing I have ever filmed.


Anna Spitz: For starters, we filmed in a pretty busy park with airplanes flying overhead and we needed clear audio for my speaking part. This meant we had to stop, what felt like every two minutes, to adjust, move, or wait for whatever sound was happening to stop so that we could film. The most challenging part of all was attempting to do this demo despite my severe lack of athleticism. We filmed dozens of clips of me spinning and falling until we could get the most graceful clip.

This took some time as gracefulness is hard to find in doing the "Up Down Dizzy" experiment. I fell down after about three seconds in every take, and in one in particular, I fell backwards and fell directly on my head, which was the worst injury I've had in years (again, lack of athleticism).

LincolnPhysics: Which video do you think EVERYONE should watch and why?

Anna Spitz: Probably “How to See Your Retina.” It is so easy and fun to do this one! This one is the most relevant in my opinion, because everyone's retinas are as unique as their fingerprints and retinal scans could be the way of the future.


Anna Spitz: It's an interesting experience because the experiment is done the same way for everyone, yet there is a unique outcome for everyone, as well.

Thanks, Anna, for giving us a behind the scenes look at the making of these interesting short videos!


Check out all of the "Try This Experiment Right Now!" videos on our YouTube Channel, AAPT Films.

Posted by James Lincoln at 3:04 PM No comments: